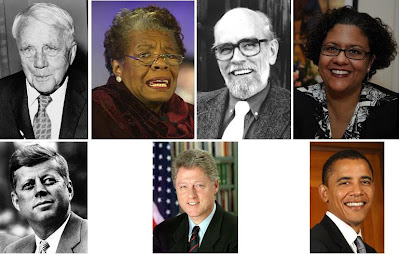 VIDEOS sobre historia general . Inaugural Poet's History
http://www.youtube.com/watch?v=_0W4AqjN4OE January 13, 2009 . Poet Elizabeth Alexander will read a poem for the President-elect Barack Obama's historic inauguration. Byron Pitts reports on how Alexander's past has led her to this day.

This is a transcript of an audio file (3:32) of poet Robert Frost's remarks at President Kennedy's inauguration, used with permission of the Kennedy Presidential Library. Audio file © 1969 Henry Holt and Company and © Estate of Robert Frost.
(begin transcript)
ROBERT FROST: First, "The Dedication."
Summoning artists to participate
In the august occasions of the state
Seems something for us all to celebrate.
Uh, And today is for my cause a day of days.
And his be poetry's old-fashioned praise
Who was the one…who was the first to think of such a thing.
This tribute, eh, for the, to be his, that here I bring
Is about …
I'm not having a good light here at all.
Is about …
The new order of the ages [mumbles off mike]
Is about the new order of the ages
That God …
That in their Latin our founding sages
God … gave his approval of.
VICE-PRESIDENT LYNDON B. JOHNSON: Let me help you.
(Laughter and applause.)
FROST: I'll just have to get through it the best I can. I think I'll say …
This was to be a preface to a poem I can say to you without seeing it. The poem goes like this ... (Applause.)
"The Gift Outright"
The land was ours before we were the land's
She was our land more than a hundred years
Before we were her people. She was ours
In Massachusetts, in Virginia,
But we were England's, still colonials,
Possessing what we still were unpossessed by,
Possessed by what we now no more possessed.
Something we were withholding made us weak
Until we found out that it was ourselves
We were withholding from our land of living,
And forthwith found salvation in surrender.
Such as we were we gave ourselves outright
The deed of gift was many deeds of war
To the land vaguely realizing westward,
But still unstoried, artless, unenhanced,
Such as she was, such as she would become, hath become.
And for this occasion, let me change that to "what she will become."
And this poem, what I was leading up to, is the dedication of the poem to the president-elect. (Applause.)
(end transcript)