To whom it may concern at http://ntcpoesia.blogspot.com/

I am writing on behalf of Culture.pl, the online magazine promoting Polish Culture abroad, run by the Adam Mickiewicz Institute and funded by the Ministry of Culture and National Heritage of Poland.

We are very pleased that you have decided to mention Wislawa Szymborska on your website http://ntcpoesia.blogspot.com/2011/06/como-escribir-y-como-no-escribir-poesia.html

We will appreciate if you would be willing to add a link to Wislawa Szymborska bio at Culture.pl
http://www.culture.pl/web/english/resources-literature-full-page/-/eo_event_asset_publisher/eAN5/content/wislawa-szymborska

You will provide your users with the highest quality content of our resource library of bios and essays on Polish culture. In view of Your involvement in poetry, may be our bios and articles about Polish poets, writers etc.  will interest You as well.

Thank you for considering our proposal.

http://www.poetryfoundation.org/article/178592
http://poetrydispatch.wordpress.com/2007/10/24/wislawa-szymborska-how-to-and-how-not-to-write-poetry/
The following are selections from columns originally published in the Polish newspaper Literary Life ( **) . In these columns, famed poet Wislawa Szymborska answered letters from ordinary people who wanted to write poetry. Translated by Clare Cavanagh, they appeared in slightly different form in our Journals section earlier this year.

To Heliodor from Przemysl: “You write, ‘I know my poems have many faults, but so what, I’m not going to stop and fix them.’ And why is that, oh Heliodor? Perhaps because you hold poetry so sacred? Or maybe you consider it insignificant? Both ways of treating poetry are mistaken, and what’s worse, they free the novice poet from the necessity of working on his verses. It’s pleasant and rewarding to tell our acquaintances that the bardic spirit seized us on Friday at 2:45 p.m. and began whispering mysterious secrets in our ear with such ardor that we scarcely had time to take them down. But at home, behind closed doors, they assiduously corrected, crossed out, and revised those otherworldly utterances. Spirits are fine and dandy, but even poetry has its prosaic side.”

To H.O. from Poznan, a would-be translator: “The translator is obliged to be faithful not only to the text. He must also reveal the full beauty of the poetry while retaining its form and preserving as completely as possible the epoch’s spirit and style.”

To Grazyna from Starachowice: “Let’s take the wings off and try writing on foot, shall we?”

To Mr. G. Kr. of Warsaw: “You need a new pen. The one you’re using makes a lot of mistakes. It must be foreign.”

To Pegasus [sic] from Niepolomice: “You ask in rhyme if life makes cents [sic]. My dictionary answers in the negative.”

To Mr. K.K. from Bytom: “You treat free verse as a free-for-all. But poetry (whatever we may say) is, was, and will always be a game. And as every child knows, all games have rules. So why do the grown-ups forget?”

To Puszka from Radom: “Even boredom should be described with gusto. How many things are happening on a day when nothing happens?”

To Boleslaw L-k. of Warsaw: “Your existential pains come a trifle too easily. We’ve had enough despair and gloomy depths. ‘Deep thoughts,’ dear Thomas says (Mann, of course, who else), ‘should make us smile.’ Reading your own poem ‘Ocean,’ we found ourselves floundering in a shallow pond. You should think of your life as a remarkable adventure that’s happened to you. That is our only advice at present.”

To Marek, also of Warsaw: “We have a principle that all poems about spring are automatically disqualified. This topic no longer exists in poetry. It continues to thrive in life itself, of course. But these are two separate matters.”

To B.L. from the vicinity of Wroclaw: “The fear of straight speaking, the constant, painstaking efforts to metaphorize everything, the ceaseless need to prove you’re a poet in every line: these are the anxieties that beset every budding bard. But they are curable, if caught in time.”

To Zb. K. of Poznan: “You’ve managed to squeeze more lofty words into three short poems than most poets manage in a lifetime: ‘Fatherland,’ ‘truth,’ ‘freedom,’ ‘justice’: such words don’t come cheap. Real blood flows in them, which can’t be counterfeited with ink.”

To Michal in Nowy Targ: “Rilke warned young poets against large sweeping topics, since those are the most difficult and demand great artistic maturity. He counseled them to write about what they see around them, how they live each day, what’s been lost, what’s been found. He encouraged them to bring the things that surround us into their art, images from dreams, remembered objects. ‘If daily life seems impoverished to you,’ he wrote, ‘don’t blame life. You yourself are to blame. You’re just not enough of a poet to perceive its wealth.’ This advice may seem mundane and dim-witted to you. This is why we called to our defense one of the most esoteric poets in world literature—and just see how he praised so-called ordinary things!”

To Ula from Sopot: “A definition of poetry in one sentence—well. We know at least five hundred definitions, but none of them strikes us as both precise and capacious enough. Each expresses the taste of its own age. Inborn skepticism keeps us from trying our hand at our own. But we remember Carl Sandburg’s lovely aphorism: ‘Poetry is a diary kept by a sea creature who lives on land and wishes he could fly.’ Maybe he’ll actually make it one of these days?”

To L-k B-k of Slupsk: “We require more from a poet who compares himself to Icarus than the lengthy poem enclosed reveals. Mr. B-k, you fail to reckon with the fact that today’s Icarus rises above a different landscape than that of ancient times. He sees highways covered in cars and trucks, airports, runways, large cities, expansive modern ports, and other such realia. Might not a jet rush past his ear at times?”

To T.W., Krakow: “In school no time is spent, alas, on the aesthetic analysis of literary works. Central themes are stressed along with their historical context. Such knowledge is of course crucial, but it will not suffice for anyone wishing to become a good, independent reader, let alone for someone with creative ambitions. Our young correspondents are often shocked that their poem about rebuilding postwar Warsaw or the tragedy of Vietnam might not be good. They’re convinced that honorable intentions preempt form. But if you want to become a decent cobbler, it’s not enough to enthuse over human feet. You have to know your leather, your tools, pick the right pattern, and so forth. . . . It holds true for artistic creation too.”

To Mr. Br. K. of Laski: “Your poems in prose are permeated by the figure of the Great Poet who creates his remarkable works in a state of alcoholic euphoria. We might take a wild guess at whom you have in mind, but it’s not last names that concern us in the final analysis. Rather, it’s the misguided conviction that alcohol facilitates the act of writing, emboldens the imagination, sharpens wits, and performs many other useful functions in abetting the bardic spirit. My dear Mr. K., neither this poet, nor any of the others personally known to us, nor indeed any other poet has ever written anything great under the unadulterated influence of hard liquor. All good work arose in painstaking, painful sobriety, without any pleasant buzzing in the head. ‘I’ve always got ideas, but after vodka my head aches,’ Wyspianski said. If a poet drinks, it’s between one poem and the next. This is the stark reality. If alcohol promoted great poetry, then every third citizen of our nation would be a Horace at least. Thus we are forced to explode yet another legend. We hope that you will emerge unscathed from beneath the ruins.”

To E.L. in Warsaw: “Perhaps you could learn to love in prose.”

To Esko from Sieradz: “Youth really is an intriguing period in one’s life. If one adds writerly ambitions to the difficulties of youth, one must possess an exceptionally strong constitution in order to cope. Its components should include: persistence, diligence, wide reading, curiosity, observation, distance toward oneself, sensitivity to others, a critical mind, a sense of humor, and an abiding conviction that the world deserves a) to keep existing, and b) better luck than it’s had thus far. The efforts you’ve sent signal only the desire to write and none of the other virtues described above. You have your work cut out for you.”

To Kali of Lodz: “‘Why’ is the most important word in this planet’s language, and probably in that of other galaxies as well.”

To Mr. Pal-Zet of Skarysko-Kam: “The poems you’ve sent suggest that you’ve failed to perceive a key difference between poetry and prose. For example, the poem entitled ‘Here’ is merely a modest prose description of a room and the furniture it holds. In prose such descriptions perform a specific function: they set the stage for the action to come. In a moment the doors will open, someone will enter, and something will take place. In poetry the description itself must ‘take place.’ Everything becomes significant, meaningful: the choice of images, their placement, the shape they take in words. The description of an ordinary room must become before our eyes the discovery of that room, and the emotion contained by that description must be shared by the readers. Otherwise, prose will stay prose, no matter how hard you work to break your sentences into lines of verse. And what’s worse, nothing happens afterwards.” 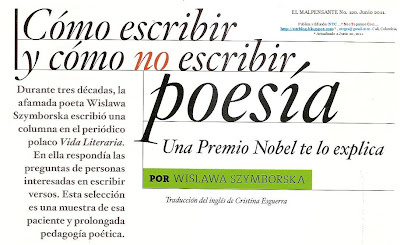 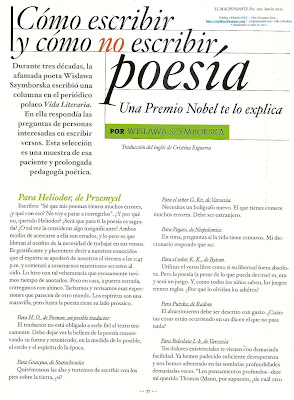 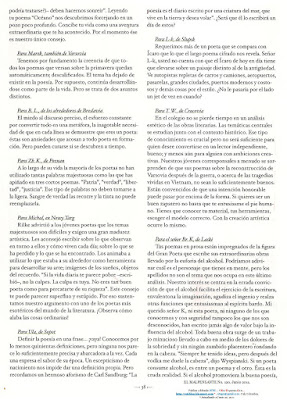 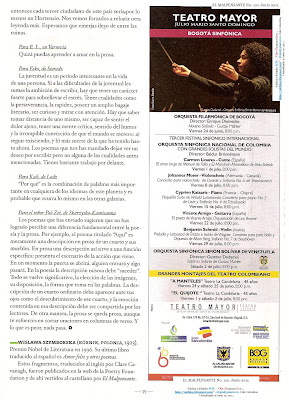 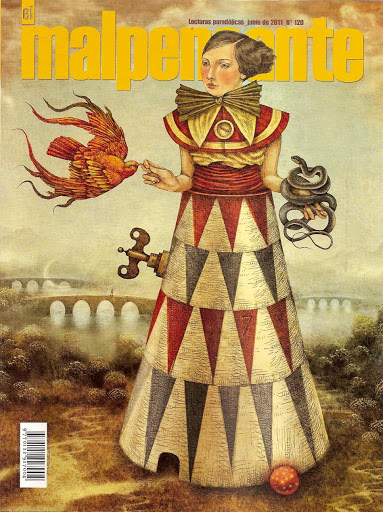